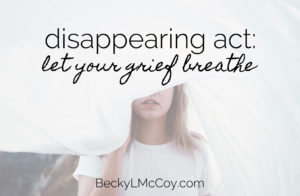 I disappeared this year. Not just a quiet period away from social media, but a full on disappearance from my life. I never quite made it to hang out with friends and I sat in the hallway during church, unable to engage with a sermon or much of the music. When I sat down to write, there were rarely words. My kids would ask to hang out and I’d realize I couldn’t remember how to do that either.

I was physically present, but mentally and emotionally absent.

Usually, I struggle September through the beginning of February. Those months include memories of Keith and my dad being sick, both kids’ birthdays, and both my dad and Keith’s heaven anniversaries. But this year February came and went and the grief cloud never lifted. I realized around May it was because our tenth wedding anniversary was looming.

How do you “celebrate” when the one you made a life with, memories with, a family with, isn’t there?

And so, it’s been nine long months of feeling like I’m the wrong end of a disappearing act gone wrong.

I know I’ve disappointed people. Not shown up when they needed me. Not noticed when they needed a hug or someone to listen. I’ve dropped balls and been inconsistent (and probably inconsiderate).

Honestly, I was completely distracted by what was going on in my head.

I’ve learned that’s a requirement when it comes to healing from and living with deep grief: more time for introspection that even this highly introverted person thought was necessary.

I’ve needed to sit with the raw emotions I couldn’t give my attention to over the last three years. There was no room in my heart, mind, or schedule for them. I was changing diapers and driving to preschool and teaching children to feed themselves and use the toilet and —

There really wasn’t time or space for my own grief and it’s been collecting dust on a shelf.

Until these last nine months. I’ve dusted it off and sat with it. And felt big things. And remembered little things. And forgotten to take care of a lot of real life, right now things.

This is why I love reading fiction. It helps me to access the emotions I’ve ignored for so long. And it reminds me that grief is a human experience. And it’s one of the hardest aspects of being human.

Currently, I’m listening to the detective novel Maisie Dobbs by Jacqueline Winspear and I had to re-listen to this quote several times.

Allow grief room to air itself.

And in those few words, all of the last nine months made sense. Without my even realizing it, I made space for the grief to air itself out, to expand and contract, and show me all of its sides. Sometimes grief is ugly and ravages you like a mysterious monster. Sometimes it’s more like sand hiding pieces of sea glass; gifts of memories glimmering, waiting to be discovered. But you have to dig. You have to do the work. It’s painful and exhausting and ugly and beautiful.

But, like a pearl in an oyster or a butterfly coming out of a cocoon, a little bit of grit combined with time and effort results in beautiful, valuable things. It might feel like you’re doing a disappearing act, but really, you’re admitting that you’re putting a few things down for awhile because you can’t carry everything at once. You’ll be able to pick them up again, eventually.

Just let your grief breathe a bit and you’ll see. 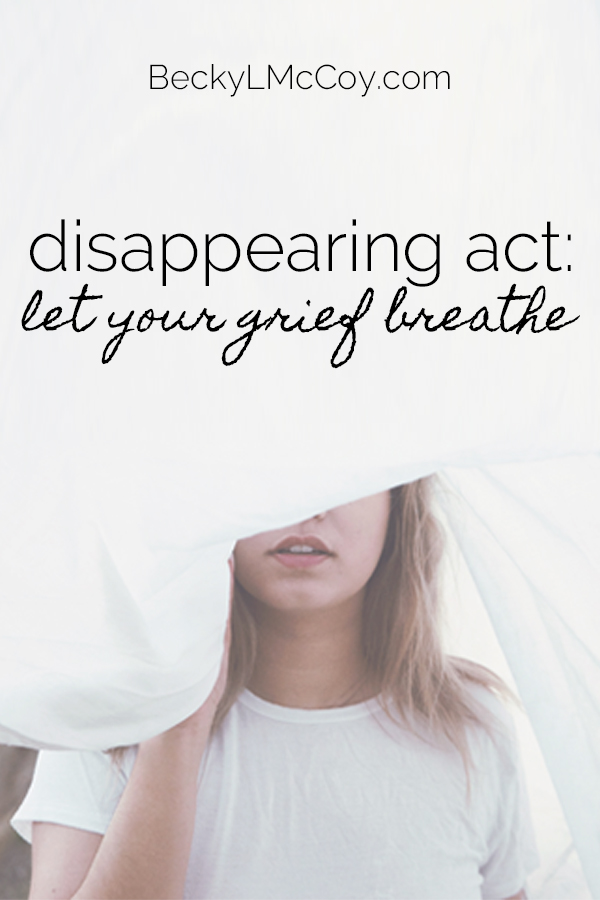